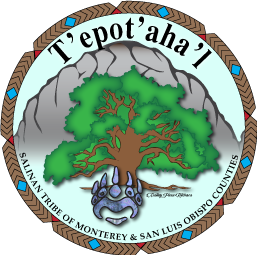 For at least the last 10,000 years Salinan people have inhabited the Central part of California from the Pacific Ocean East to the Temblor Mountains. Today we are known as the Salinan People named by the California Spanish Missionaries who built Missions San Luis Obispo de Tolosa, San Miguel Arcangel and San Antonio de Padua.  Through self-reliance and preservation, we continue to thrive through hundreds of years of changes that impacted our culture.  Living in the lands of our ancestors we have all we need to survive, we continue to hunt, fish, and gather traditional materials during these modern times.  We continue to speak our traditional language, which is part of the Hokan Language group, believed to be the oldest in California.  The Missionaries divided Salinans into three dialects, the Playano (of the beach people), northern Antoniano, and southern Migueleno.  Through our Educational non-profit we educate the people of the Central Coast and the world about our connection to this land and the importance of protecting and preserving this special place for generations to come. 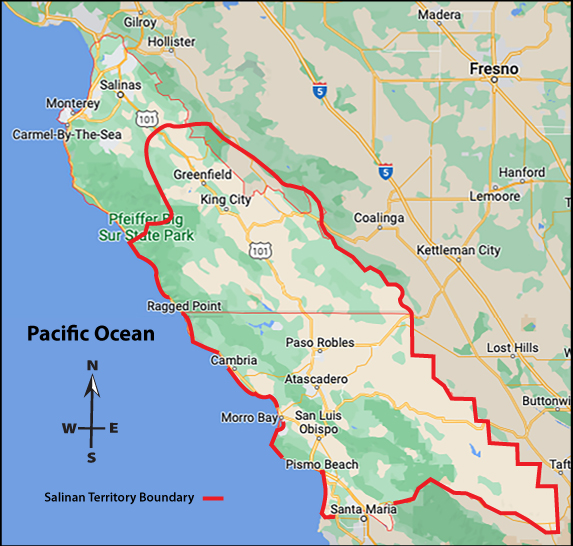 Welcome to Winter Solstice. We, the people today known as the Salinan Tribe, welcome all to the base of Lesa'mo', Morro Rock, as we share food and stories, and members of our tribe ascend to celebrate all that is sacred. Sacred is the defining term – the Creator made the World, all the plants and animals, even all humans. I personally believe, as Lakota spiritualist Little Crow taught, “Everything is Sacred. Everything is Related.”

We are often asked, who owns Lesa'mo', Morro Rock? Isn’t this Chumash land? Our answer is easy, but not simple. Morro Rock belongs to nobody, but rather, we, the Salinan Tribe, belong to Morro Rock. Our ancestors lived and prayed here, and we continue this today and tomorrow. We are still here, and we will remain. The very Western Civilization concept of “land ownership” is part of the heart of what troubles us all today.

CLICK HERE TO SEE PICTURES OF THE 2022 WINTER SOLSTICE

Ignorance, greed and hatred are powerful evils. Just look at dysfunctional Sacramento, war-ravaged Ukraine, the assault on the spirit of American Democracy in Washington D.C. for examples, and the fractionation (it’s a word, look it up some time – fractionation) of today’s world is on display. Ignorance and greed win too often, and when they do, we all lose. I’ve been trying to fight against ignorance and greed and outright hatred of others for just a short time now, and in those fights, I find myself challenged to not let those characteristics find their way into my own thoughts and words.

I wish to bring up something that happened this year. The Army Corp of Engineers planned to bring rock material back to Lesa'mo', Morro Rock, under the belief that they were doing something right, or rather, trying to “correct a past wrong”. The Rock should never, ever have been quarried, dynamited, but the illusionary act of returning rock added nothing positive. Nothing made whole, nothing fixed, just a useless gesture from which some small groups of people profited. Several cheered this effort, some as a public relations act by a specific pretendian (pretend Indians = Pretendians) group claiming, “see, we did good.” Big woo hoo. Our tribal council made the educated decision to not support this effort of ignorance, as we believed and still do that it was a wasteful and futile effort. The returned rocks, that were dynamited and hauled away to build neighboring breakwaters, were always part of Lesa'mo', but fractionalized and divided, just like the native peoples were by governments agents and church leaders. Still, those rocks knew that they remained part of Morro Rock, belonging to it no matter how far away.

Our traditional lands the Salinan People belong to count a large swath of what is now known as the Central Coast of California. Our 13 known villages stretched from Monterey County to the Santa Maria River, inland along the Temblor Mountains, and all along the coast, from Big Sur to south San Luis Obispo County. We lived along the length of the River now known as the Salinas with which we share our name, from its Adelaide headwaters flowing north into Monterey. But our ancestors - whether known today as Salinan, Chumash, Yokat, or European Colonizers – didn’t own any of that land. The Land owned them. They shared what they had with any who joined with them, as we do today. As we recognize the Creator’s truths - Everything Sacred, Everything Related; and celebrate Solstice together, I want to say that, if you are here, today you are Salinan. We are still here, and will be so tomorrow.